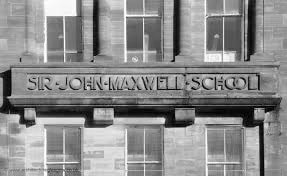 The ceremony of formally opening the Sir John Maxwell School, Pollokshaws, which has just been re-built by the Eastwood School Board was fixed for Saturday afternoon and it has passed off very successfully in presence of a large and representative gathering of ladies and gentlemen in one of the central halls.  Mr William G Crum, the Chairman of the Board presided, and among others present were the following:-

Mr John Hamilton, architect afterwards in name of the tradesmen and himself presented Sir John with a gold key ornamented with the Maxwell shield and crest and suitably inscribed as a souvenir of the occasion.  Sir John acknowledge the gift in a sentence or two.
The vote of thanks to Sir John for his services that afternoon was proposed by the Rev Alexander Walker. The building committee, architect and contractors were thanked on the call of the Rev S D McConnell and Mr Hamilton responded on their behalf.
Mr D Munro Fraser in proposing a vote of thanks to Mr Crum for presiding, observed that he was glad to hear Sir John speaking of a School Board turning out better men and women.  Teachers were criticised for doing so little good but he was inclined to wonder if these critics had studied the sort of education the children receive after they leave school and return to their own homes.
The singing of the National Anthem and the benediction brought this part of the proceedings to a close. The company afterwards made a tour of the rooms and before leaving they were served with afternoon tea.
ARCHITECTURAL DESCRIPTION
The site of the school contains about 4400 square yards, and it has the advantage of being surrounded on all sides by streets. The school is three storeys high , covers about 1188 square yards, and its principal facade extends along Bengal Street from which it is set back about 60 feet. By this arrangement the greater part of the playgrounds are on the sunny side. The boys and girls and infants have each separate entrances from their own playgrounds with the teachers’ rooms placed convenient. The ground floor is occupied chiefly by the infant department, and the upper floors by the more advanced classes. Two of the classrooms were erected about three years ago, at a cost with their furnishings of about £2000 as a nucleus to the present school, and including these there are 22 in all, of which 19 have a southern aspect. The classrooms will seat 1260 pupils, for whom excellent spacious and airy lavatory, cloakroom and staircase accommodation has been provided. In the meantime three of the classrooms are to be used for the tuition of cookery, art and manual instruction.  There are two amply lit central halls, each 62 feet long by 25 feet broad.  These form a fine feature of the design and provide ample room for marshalling and drill purposes.  The walls of the school are timbered lined for 4 feet up, ands those of the halls and passages are tiled for 5 feet high.  For sanitary reasons the usual dust protecting mouldings and right-angled corners at the junctions of the floor and ceilings with the walls are avoided.  Their place is taken by simple and easily cleaned coves.